Jokes and pictures about photography 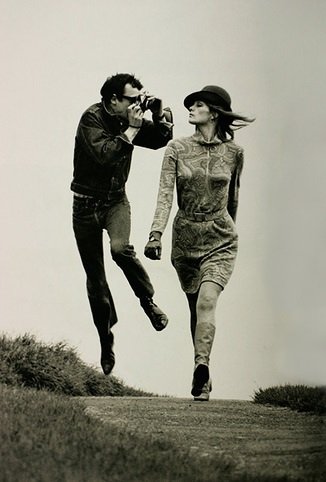 Old photographers never die, they just go out of focus.

When Jack London had his portrait made by the noted San Francisco photographer Arnold Genthe, London began the encounter with effusive praise for the photographic art of his friend and fellow bohemian, Genthe. “you must have a wonderful camera…It must be the best camera in the world…You must show me your camera.” Genthe then used his standard studio camera to make what has since become a classic picture of Jack London. When the sitting was finished, Genthe could not contain himself: “I have read your books, Jack, and I think they are important works of art. You must have a wonderful typewriter.”

If an old man asks a young girl for a date…

If the young girl accepts…

If the old man and the girl decide to marry…

However, if they want great wedding photographs…

How does Santa Claus take pictures? 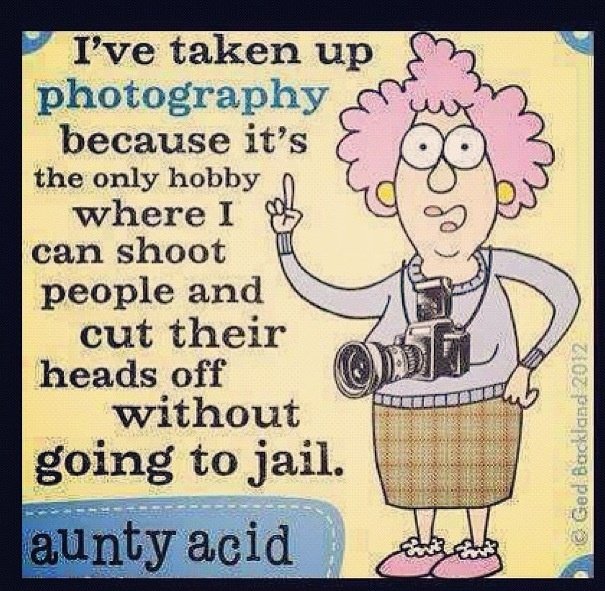 A fellow bought a Labrador puppy from the pet store and named him Kodak. That way he could say he owned a Kodak lab.

Why Davinci painted Monalisa? Because he has no D200 nor 30D. He can only paint it.

A journalist photographer was caught out in a rain shower when he saw a dark gloomy house. While he was drying off in the house he heard scary sounds and saw a ghost coming towards him. He grabbed his camera to take pictures. The ghost asked him what he was doing, he said “I just want to take your picture for the newspaper.” The ghost was glad for the exposure and posed for the photographer. When his film was all done he thanked the ghost and rushed to his office to get the film developed. When he saw the results he was terribly disappointed that they all came out black – they were all underexposed.The moral of the story is: The spirit was willing but the flash was weak.

There was this photographer in one of the most remote parts of the African continent on an assignment. He came across a primitive village where the residents were living in thatched huts and wearing colorful primitive garments. He approached a man who appeared to be the chief who was wearing a large headdress made of woven hemp and colorful feathers.The photographer, not knowing how to speak to him, pointed to his camera then to the chief. The chief nodded. As the photographer was taking a meter reading the chief said “today use f/16 at 1/125 for ISO 100 film”. 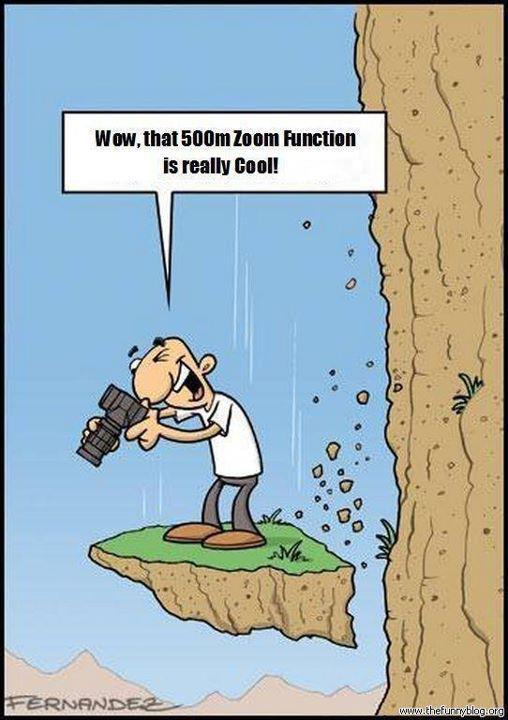 Two photographers walking along a street and they pass a beggar sitting with his hat up-ended on the pavement, begging for money. One guy keeps walking. The other stops. Later when they catch up with each other the first guy says to the other. “Hey I saw you stop for that beggar. What did you give him?””Oh” says the first guy, “1/125th at f5.6″

A photographer took a self portrait in a park. Due to lighting conditions he used the built in flash on the camera. He quickly got arrested for flashing and exposing himself in the park.

Signs that you are a photographer: 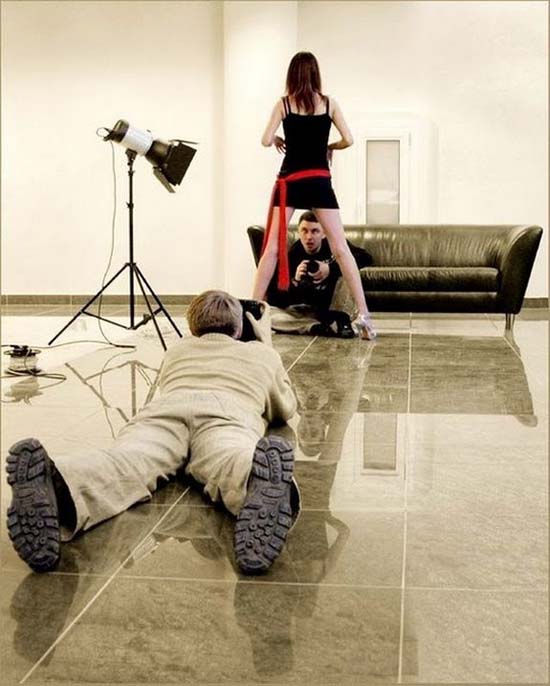 A person that works at a camera store receives a very confused looking woman at the counter, she gives the camera to the store employee and says “I took pictures, but I forgot to have film in the camera. Can you please get them out of the camera for me?”

St Peter and Lucifer were at the gates admiring the clouds when the subject got onto photography. They couldn’t agree whether Heaven or Hell had the best photographers so they decided to arrange a photo contest.St Peter rubbed his hands with glee and Lucifer demanded to know why he was looking so smug. “Well,” said St Peter, “in Heaven we have all the best photographers”. Lucifer slowly raised his head, grinned and replied “Ah, but we have all the judges…”

If you saw a man drowning and you could either save him or photograph the event…what kind of film would you use?

A photographer for a national magazine was assigned to take pictures of a great forest fire. He was advised that a small plane would be waiting to fly him over the fire.The photographer arrived at the airstrip just an hour before sundown. Sure enough, a small Cessna airplane was waiting. He jumped in with his equipment and shouted, “Let’s go!” The tense man sitting in the pilot’s seat swung the plane into the wind and soon they were in the air, though flying erratically.

“Fly over the north side of the fire, ” said the photographer, “and make several low-level passes.”

“Why?” asked the nervous pilot.

The pilot replied, “You mean you’re not the flight instructor?”

Second Person : “No. You have to take the film to the chemist!”

Stranger: “That is beautiful child you have there.”

Mother: “That’s nothing. You should see his photograph.”

The quickest way to make money at photography is to sell your camera. 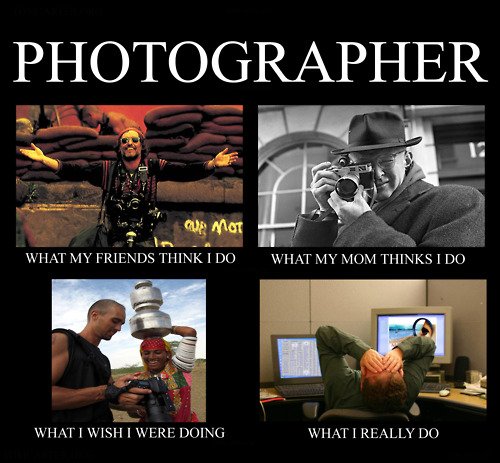 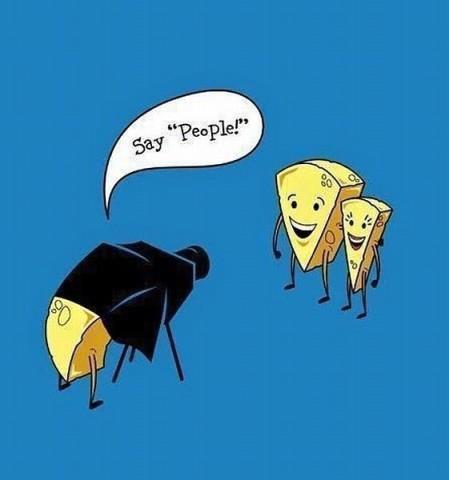 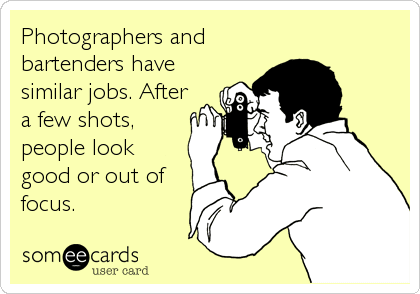 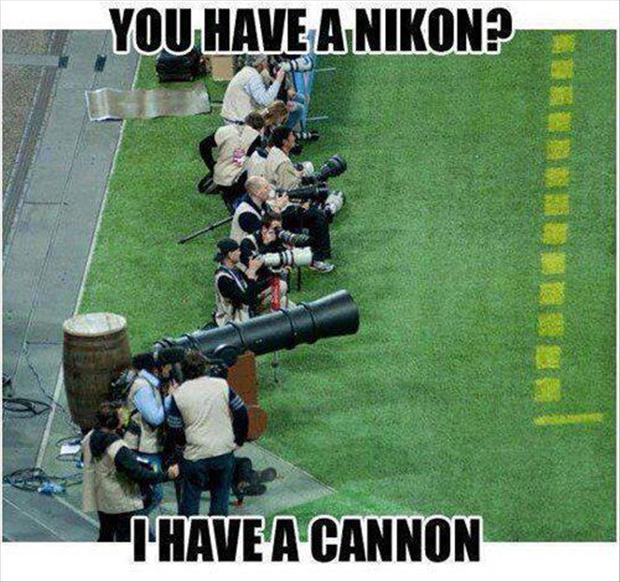 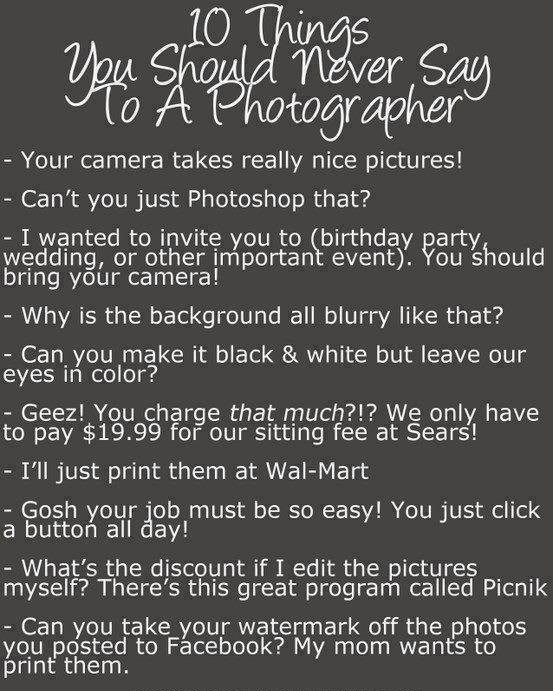 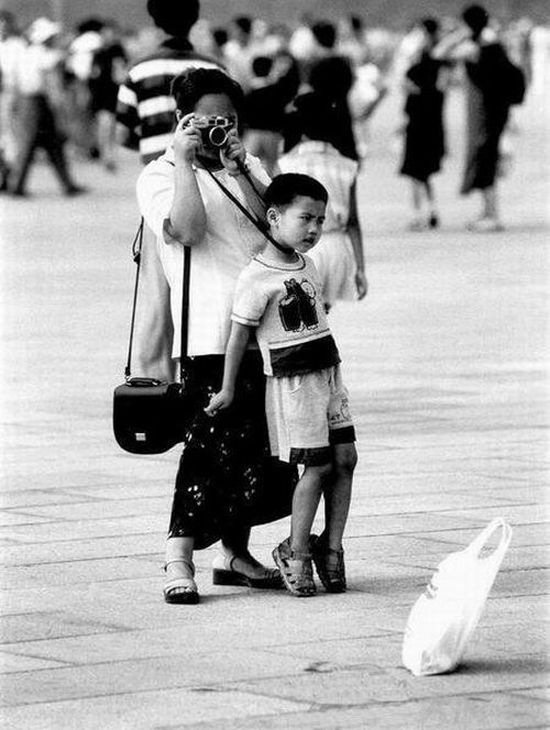